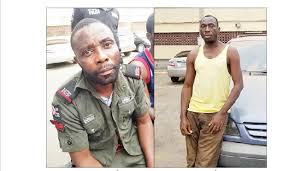 The Lagos state police command has given chilling details of how it nabbed a fake policeman along Lagos metropolis escorting some unscrupulous Nigerians conveying contraband goods from Cotonou in Benin republic.


Explaining further, the Lagos state police public relation officer, Bala Elkana said in a statement that the suspect during interrogation could not state the squadron he was attached.
His word; “On February 10, 2020, around 8am, policemen on enforcement of the ban on motorcycles in restricted areas arrested one Monday Job, 32, at Oshodi, while riding a motorcycle and fully dressed in riot police uniform. A close look at his name tag and badge gave room for further probing. He could not give a satisfactory account of himself and the squadron he was attached to. In the course of the investigation, he confessed to being an impersonator.
“It was revealed that he had been wearing the uniform to commit criminal activities, including the illegal escort of contraband goods from Cotonou to Lagos, escorting of vehicles from Lagos to other parts of the country, intimidating, harassing and extorting money from innocent members of the public while claiming to be a riot policeman. An investigation is ongoing and the suspect will be charged when the investigation is concluded.”