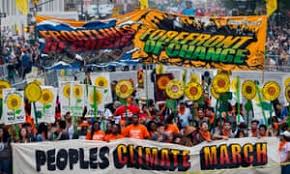 A policy on climate change for Nigeria is timely and perhaps needs to be re-echoed again especially when the leadership position of Nigeria in Africa is following it in an agrarian manner, experts have said.

This conclusion was reached at a crucial workshop on its  re-evaluation and on-going discussion of the outcome of a draft policy document   that reviewed the draft National Climate Change Policy document by experts and stakeholders, which took place in Lagos last week.


These specific objectives of stakeholders re-evaluation workshop was organized by Environmental Safety and Awareness initiatives (ESAI), An NGO as mediating partners with the Federal Ministry of Environment essentially on climate change in other for quick implementation on its past review which adopted a draft Copy on National climate change policy documents.

"Nigeria has many policies that are relevant to climate change such as National Environment Policy Enacted in 1989 and revised in 1999. However, towards the implementation of a National Policy, specific plans which have bearings to climate change policy has been elaborated.

Experts also believe there are several other policies and plan mostly sectoral in the areas of energy, Agriculture, land use, industry, water resources, health, transportation, urban Development, among others whose provisions impinge directly on the resolution of issues and problems on climate change and which therefore must be viewed as companion policy implementation plans to the National Climate Change Policy.

They argued that there  is the need to also explore the various means available  for financing climate change adaptation and mitigation strategies  as well as set targets  that are imperatives for a successful implementation of policy document; through capacity building on climate change  in other to combat  hunger, poverty that should be taken adequately, with the understanding of  capturing  it in its  policy document; climate change remains  a cross cutting  issue, therefore, there is a need for  harmonization of already existing and disparate sectoral policies affecting issues of climate change  to give greater, more  effective and sustainable focus to the draft policy document on climate change’'

"The workshop acknowledged the commendable efforts in producing the draft policy on climate change with expectations that the observation made at this workshop will be imputed into the final outcome".

Minister environment, Mallam Ibrahim Usman Jibril, who was ably represented said, the federal government has taken the challenge of climate change seriously because of its potential impacts on the green environment and the socio-economic development efforts.

He said the president  Buhari while sharing  concerns expressed by the UN Secretary-General António Guterres at the just concluded United Nation General Assembly; said  the world is on the verge of climate catastrophe, President Buhari stated that “undeniably, climate change is a human-induced phenomenon.”
Jibril said the president has reiterated Nigeria’s commitment to its obligation under the Paris Agreement in the way it is enshrined in our nationally Determined contribution and ensure a resilient future that mainstream climate risk in its decision making

“Deforestation and land degradation, fresh water shortage, food security, air and water pollution are  ‘’the threat to these resources  which call for concerted efforts on the part of stakeholders to make the issues of climate change, a priority in the development planning and implementation”.

Climate change will affect every one’’. He said those already affected by poverty, malnutrition and disease could face displacement and new hardship. All sectors of socio-economic development are vulnerable to climate change. Agriculture and, food security, water resources, public sector and habitat sector are worst hit.

“Notwithstanding the status of our country, like other developing countries, under the current global climate change negotiation, we must begin to take steps to adapt to the expected impact of climate change.

According to him, there is a policy that can address desertification control, forest and ecosystem adaptation, policy options for water resources, agriculture and even the coastal and marine environment that is vulnerable to sea rise.

‘’it is in this regard, our ministry has commenced with  efforts at addressing climate change in a responsive and strategic manner guided by national developments principle, which includes poverty alleviation, access to basic amenities, job creation, rural development, human resources and improved health, leading to sustainable economic growth and development’’