Insecurity should Not Be Portrayed in Bad Light- Oshiomhole 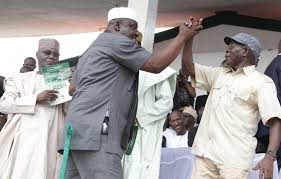 The Chairman of All Progressive Congress, Adams Oshiomhole on Saturday said those trying to portray insecurity in the country in a bad light in some state and as the handwork of herdsmen is doing so to achieve selfish political gains.

“Let me urge you to be more careful because this season people are spreading untruth. People are being hired to turn the gospel upside down. They want us to believe that every problem should be explained in ethnic and religious terms. “We have a problem and we must confront those problems’’.

Criminals must be dealt with individually as criminals and government at all levels must work hard to protect every Nigerian regardless of tribe or religion”, he said. He said President Buhari and the security agencies are working hard to put an end to the security challenges facing the country.

Mr. Oshiomhole urged the people of the Southeast to vote for APC and President Buhari in next year’s election as he has delivered democracy dividends to the zone. ” If Buhari has remembered the Southeast which did not give him more than 10 percent in 2015 imagine what he will do if you give him 85percent in 2019″. Minister of Science and Technology, Ogbonnaya Onu in his remarks said 2015 he pleaded with Southeast not to put it’s eggs in one basket but his pleadings fell on deaf ears “In 2015 I pleased with the zone not to put our eggs in one basket.

"Today, I want them to compare the 16 years of PDP and relate it with just 3 years of PDP. The three years of APC is greater than the 16 years of PDP. He said that in addition to the new River Niger bridge and many federal roads in the zone, Buhari has also approved a new agency for robotics and artificial intelligence to be established in Southeast''.

“The time has come for the Southeast to be in the mainstream of Nigerian politics by voting for President Buhari and APC in 2019”. He urged the people not to give their PVCs to anybody but to guide it jealously as it is the only way they can return President Buhari in 2019. Former Governor of Abịa State, Orji Uzor Kalu said the new River Niger Bridge, which the PDP could not construct in 16 years, has now reached 53 per cent completion.

He also noted that work is progressing in the two major highways in the zone, the Onitsha to Enugu Road and the Enugu Port Harcourt expressway. According to him, the Southeast will give the President and APC majority of it’s votes in 2019 to reply him for all the projects and democracy dividends he has magnanimously cited in the zone.

Some of the decampees who were received include, Senator Sunny Ogboji, Former Minister of Power and Steel, Goody Ogbaga, former Secretary to the State Government, Ifeanyi Odoh and Former Speaker of Ebonyi State House of Assembly, Augustine Nwankwegu.
Posted by Urban Express News at 16:16:00