In this Report, Sylvanus Ekpo narrates how the former minority leader in the Senate, Obog God’s will Apkabio’s Defection in Uyo, the Akwa-Ibom state capital   encapsulates the entire state coming with mix-reactions, some legislators and other members of the opposition party that followed in solidarity with their leaders, and his justification for dumping the opposition party, the PDP, joining forces with the Governing All Progressive Congress

By the last count, more than 30 Senators from the APC, including the Secretary to the Government of the Federation, Boss Mustapha, who represented the Acting President, Professor Yemi Osinbajo, witnessed the historic decamping of the former minority leader coming from opposition to the governing party, All progress congress.
Among the legislators that defected include a member from Abak Federal Constituency, Mr Emmanuel Ikon; a member from Ikot Ekpene Federal Constituency, 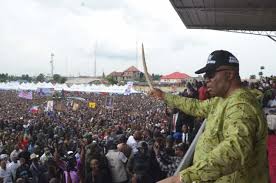 Emmanuel Akpan; a member from the Essien Udim State Constituency, Mr Nse Ntuen; and a member representing Etim Ekpo State Constituency, Mr Gabriel Toby.
The two commissioners, who also defected from the PDP, included the Commissioner for Culture and Tourism, Mr Victor Antai and Commissioner for Labour, Productivity and Manpower Planning, Mr Ibanga Apkabio.
Deputy Inspector-General of Police, Udom Ekpo-Udom (retd.), among others, also defected
The event saw Senator Godswill Obot Akpabio, at the Ikot Ekpene Township Stadium, with more of his follower’s thoughts attracting speculations that he's gunning for the position of Senate President in the National Assembly.
But in reacting to the said developments, Apkabio quickly debunked such insinuation saying the singular basis he left PDP was because they didn't have a reward system, alluding to the entrance of people like the Senate President, Bukola Saraki, into the Party where he was thereafter, confirm its national leader.
His Word: "This is the end of PDP in the Niger Delta. What I have done is to take Akwa Ibom State and the South-South to the Centre", he boasted amidst cheers from the mammoth crowd.
"Nigerians are yet to see the best of President Buhari; we must give him a chance to govern this country. Do not be afraid of President Buhari if your hands are clean", he maintained.
He dismissed speculations that they put a gun to his head to defect, claiming that he had never been charged to court by the EFCC.
Although the Efcc said the case of alleged fraud involving Apkabio is not over, the Economic and Financial Crimes Commission insist the former Governor has a case to answer.
Prodding further, the Spokesman for the Efcc, Mr Wilson Uwajaren in response to a question on Channels Television broadcast on sunrise daily monitored by urban express news online said Apkabio’s case was still on-going.
When ask if Apkabio was still under probe, the spokesman said Efcc does not close cases or give clearance to anybody”
Apkabio first came under investigation in late 2015 following accusations that he diverted over N100bn from the oil-rich state between 2007 and 2015, an allegation which he has denied.
The EFCC wrote letters to Zenith Bank, Keystone Bank, First City Monument Bank, Skye Bank, and United Bank for Africa demanding information on the state’s accounts.
The anti-graft agency was said to have also extended its investigation to the accountant-general, the auditor-general, the Speaker and the clerk of the House of Assembly.
Describing it as a witch-hunt, the Akwa Ibom State Government refused to cooperate with the EFCC and even dragged the commission to court and obtained an interim injunction, restraining the EFCC and other Federal Government agencies from probing the finances of the Akwa Ibom State Government but this was temporary as the judge lifted the injunction months later paving way for full investigations.
The matter was taken to the Appeal Court where it has remained for over a year.
According to an interim report by the EFCC, the former governor allegedly gave a bank N1.4bn for unknown reasons.
Apkabio told his large supporters that the petitions to the EFCC have been sorted out and that he has not been charged to court because nothing was found against him.
He urged Senator Ben Bruce who had quarrelled with him for breaking ranks to complete the Tropicana Entertainment Centre in Uyo for which all contract sums had been paid to channel his grievances elsewhere.

The former minority leader denied being an accomplice to the failed attempt to impeach the Senate President, Saraki, on Tuesday at the National Assembly, noting that he was airborne to Akwa Ibom to meet with his constituents when the fiasco broke out.
"In times like this, all hands must be on deck to salvage the country.
"For those of you whom I have offended who are already in APC, please forgive me. For whatever I did, I did it for collective interest."
The APC chairman, Comrade Adams Aliyu Oshiomhole on his remark said Apkabio earned his respect while he too was a governor in Edo State because of the developmental strides in Akwa Ibom and crowned him as the leader of the APC in the state.

He later presented a broom to Apkabio, a symbol of the Party, with which he will use to sweep out opposition elements in the state.
The Senate Leader, Ahmed Lawan, said "this is one defection that has swallowed all previous defections.

“They followed him everywhere; they followed him overseas; they were on their knees begging him not to defect”.
"From today, Akpabio is a full-blooded APC Caucus member and his influence has grown beyond Akwa Ibom and the National Assembly".
Also speaking at the event, the APC National Leader, Bola Tinubu threw darts at the PDP, saying they believe in sharing and looting the treasury.
In doing so, many observers believed the former governor and All progressive National Leader had forgotten to mention that Apkabio was a member of PDP for those 16 years and served as governor for eight years in Akwa Ibom state.
Adding to what APC National Leader has said, the Managing Director of Niger Delta Development Commission, NDDC, Obong Nsima Ekere, himself a strong contender for governor, also claim Udom's government had neglected Akpabio's legacy by not completing the Ikot Ekpene - Uyo road and the 4 Points by Sheraton hotel in Ikot Ekpene.
He accused the State government of fulsome deceit by its failure to rejig the moribund Peacock Paints in Etinan LGA and the various cottage industries for which millions had been voted for completion but which had remained in a state of disrepair.
Meanwhile, the National Chairman of the Peoples Democratic Party, Prince Uche Secondus, has described the defection of Apkabio to the APC as unfortunate.
A statement from the National Chairman’s Media Office, which was signed by his Media Adviser, Mr Ike Abonyi, said, “I cannot fathom any reason why on earth,  Senator Apkabio should work against the tide, moving at the opposite direction to a place every reasonable person is escaping from.
“He deserves our pity because whatever would make somebody choose badly for good is clearly one that he should be prayed for, for salvation especially given the fact that wolves are waiting for his arrival to devour him.
“How on earth can anybody who has his eyes wide open be seen walking into danger knowingly?”
Secondus lashed out at the APC, for allegedly intimidating people into their alleged drowning boat ostensibly to ruin and disintegrate the person involved.
He called on the people of Akwa Ibom to be wise and know when to turn their back from a leader directing them to danger.


“I urge you (people of Akwa Ibom)  to remain focused and continue to give support to your hard-working governor, Emmanuel Udom, as he remains unrelenting in the delivering of democracy dividends to the people,” he added.
Posted by Urban Express News at 08:25:00