The Allegation of Assault allegedly meted out to the governor of Ekiti state Ayodele Fayose citing police intimidation and harassment and that which has been trending online has taken a new dimension as the political party that sponsored the election of the governor, the people Democratic Party storms the national assembly   for what it described as excessive use of power by the federal government and an assault on democracy. The developments that attract this protest came in the encounter between PDP supporters and policemen in Ekiti state.

The police had broken up a planned rally led by the state governor, Ayodele Fayose, with gunshots and tear gas. Images emerged later purporting to show the governor disoriented, sitting on the ground. Footage also showed the governor wearing a neck brace, weeping over his alleged assault by the security operatives.PDP National Chairman Uche Secondus, who led the demonstrators, condemned the development. 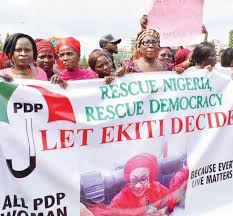 Some of the marchers bore placards with inscriptions that included: ‘Nigeria is sliding into a one-party state’, ‘Buhari stop the killings’, ‘INEC, security agencies are APC’s rigging machines’. The Ekiti governorship election, which has Deputy Governor Kolapo Olusola as PDP candidate, holds on Saturday. Secondus complained: “We are aware and we have been reliably informed that INEC and a section of the security agencies have prepared to rig the election. That is why Ekiti, today, has been militarized and over-policed. 30,000 policemen and women are in Ekiti. The citizens of Ekiti are afraid. They are traumatised. They are harassed. And they are being goaded not to come out from their homes. They (police) arrest members of our party and the citizens of Ekiti. There was a civilian coup d’état. The Ekiti government house was sealed. The governor was brutalized. This is an eyesore to democracy.”
Stressing that the protesters had come to the National Assembly because it “represents democracy and the hope and aspirations of Nigerians,” the party chairman implored the international community to “watch what is happening in Ekiti.”He doubted the ability of the APC and the Independent National Electoral Commission (INEC) to deliver credibility, saying: “If this is the type of election they want to conduct in Ekiti, (then) the 2019 general elections are under threat.”

He added: “Security agencies are not above the law. The executive arm of government is not above the law. They are aware that INEC has printed result sheets to do replacement by some security agencies. They carried it out in some states. They did it in Edo State and are now ready to do the same in Ekiti. Is this the type of democracy we want? PDP believes in the rule of law. President Buhari and the ruling APC must obey the rule of law.”
Receiving the petition, Deputy Senate President Ike Ekweremadu, accompanied by Deputy Senate Leader Bala Ibn Na’Alla, promised: “We will do everything possible to ensure that we continue to work within the tenets of democracy. We have heard you. We are going to make contacts with all the institutions of democracy as it concerns the state.“We shall make contact with INEC, the police and other security agencies to ensure that they are neutral. I want to assure you that as soon as possible, there is going to be a free and fair election in Ekiti.”
But former PDP Woman Leader Kema Chikwe seemed unconvinced by the pledge, declaring: “We are here because we are sceptical. So, we are not sure of what is going to happen. There are too many uncertainties. And we are here because of these. There are excesses. Everywhere in Ekiti has been turned into a war zone. The governor has been humiliated. And he has immunity. What type of democracy do we have?”
In a statement by PDP National Publicity Secretary Kola Ologbondiyan, yesterday, the party encouraged Ekiti people not to despair over “the unleashing of violence on them by the President Muhammadu Buhari-led All Progressives Congress (APC) and its candidate, Dr. Kayode Fayemi, but square up for their inevitable triumph over oppressive forces at the Saturday poll.
“The harassment, arrests, threats and Wednesday’s manhandling of beloved Governor Ayo Fayose by the police squad detailed by the APC amplifies the clarion call for the people of Ekiti State to march shoulder to shoulder with unequalled vigour against the oppressors by voting en masse for the PDP.”The PDP said: “We know that the whole essence of heavy security presence in Ekiti State is to frighten the people and scare them away from participating in the election. But such cannot work in Ekiti where the people are famous for their boldness, fearlessness and resistance in the face of repression.
“The PDP, therefore, charges the people of Ekiti State to use the election to manifest to the world their well-known bravery, by coming out in their millions in defiance of all odds, to vote for their preferred candidate, Prof. Kolapo Olusola-Eleka.“The PDP notes with dismay that the APC candidate, Kayode Fayemi, could conspire with external forces to bring in thugs and policemen to attack innocent citizens and even encourage the manhandling of a sitting governor, just to satisfy his masters in Abuja.


“The people of Ekiti State are no longer at a loss regarding the intention of external forces to use Dr Fayemi as an entry point in the attempt to foist an oppressive regime on them, strip them of their ancestral pride and heritage, and place them under subjugation. For this, they must resist the APC to the end.”A coalition of INEC-accredited observers also expressed concern over Wednesday’s incident. Speaking to reporters in Ado Ekiti, the Executive Director of the Centre for Credible Leadership and Citizen Awareness, Dr Nwambu Gabriel, on behalf of the 15-member body, told reporters the police should have handled the situation by other means rather than using tear gas and bullets.
Posted by Urban Express News at 08:47:00