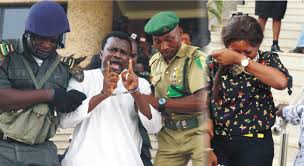 Charles Okah and Obi Nwabueze’s Trial came to a sad end yesterday as the federal high court in Abuja found them guilty of October 1 bomb-blast that took away several lives. The duo was alleged to have masterminded those dastardly acts and was subsequently sentenced to life imprisonment


The trial judge, Justice Gabriel Kolawole, who delivered the four-hours thirty minutes judgment on the eight-count terrorism charge held that Okah, a younger brother to former leader of the Movement for the Emancipation of the Niger Delta (MEND), Mr Henry Okah, and his accomplice, Mr Obi Nwabueze, used dynamites to unleash acts of terrorism on Nigerians and foreign dignitaries, who had gathered at the Eagle Square for the Independence day celebration.

The judge held that both the documentary and oral evidence that was adduced by the Federal Government linked the convicts (Okah and Nwabueze) to the Independence Day bombing at the Eagles Square.
“The defendants are found guilty as charged in the five out of the eight-count charge contained in the amended charge dated January 10, 2011, and filed January 11, 2011, which relate to them. “They are accordingly convicted as charged,” Justice Kolawole held.
Furthermore, the court dismissed the convicts’ plea for clemency and agreed with the prosecuting counsel, Dr Alex Iziyon (SAN), who had urged the court to discountenance the convicts’ allocutus (plea for mercy).
“The convicts are hereby sentenced to life imprisonment,” the court declared.While the Okah brothers were alleged to have coordinated as well as procured all the materials that were used for the attack, the Federal Government told the court that it was the second defendant, Nwabueze, that helped them to fix Improvised Explosive Devices, (IEDs) in two cars used for the bombing.
Okah, Nwabueze, Edmund Ebiware and Tiemkemfa Francis-Osvwo (aka General Gbokos) were initially arraigned before the court on December 7, 2010, over their alleged involvement in the bomb blast, which killed about 12 people and injured several others.
However, Francis-Osvwo later died in prison custody, while Ebiware, who had his trial conducted separately, is currently serving life imprisonment upon his conviction in 2013, leaving Okah and Nwabueze to face their trial.
In the cause of the trial on the suit marked FHC/ABJ/CR/186/2010, the prosecuting counsel, Alex Izinyon (SAN), called 17 witnesses to prove that the defendants actually committed the offence.   And at the close of the case by the prosecution, the defendants filed a No-case-submission on the ground that there was no need to enter a defence,  since to him, there was no substantial evidence against.
Posted by Urban Express News at 07:35:00