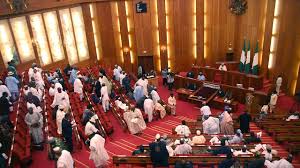 The recent sequence change of time-table of  2019 elections at Nigeria’s National Assembly has been attributed to the many rancour leading to fallout of intraparty crisis in All Progressive Congress APC, urban express-news online has learnt

supporters of President Mohammadu Buhari appear disturbed over the reordering of the 2019 election timetable by the National Assembly, NASS, fact check by urban express-news online revealed that the development was originally conceived by All Progressive Congress, APC, members.

The action which was carried out through the passage of a Bill for the amendment of the Electoral Act by both chambers of the NASS was gathered to be a fall-out of the internal crisis in APC, especially its perceived frosty relationship with the NASS.

Specifically, what was described as the absence of synergy between the Presidency and APC lawmakers was said to have directly informed the decision by both arms of the APC-controlled NASS. President Buhari Refuse assent to the Bill It was also learnt that should the President refuse assent to the Bill, getting the required two-thirds majority to override it may not be easy for both arms of the NASS.

These findings which were revealed to urban express-news online by some of its members of the House of Representatives who pleaded anonymity.

Member of the green chamber told urban express news-online that the reordering of the election order, which he described as a breach would not have occurred if President Mohammadu Buhari had firm control of party affairs by the virtue of his position.

Two-thirds majority Giving further insight, one of the lawmakers said: “I like the amendment. Something triggered it. We need to look at it dispassionately from two perspectives. One is the nationalistic angle which is in the interest of the nation so that the victory one of individual does not sway the direction of all the votes in the nation. ‘’There is the political angle which has to do with the relationship between the Presidency and the National Assembly. Unfortunately, it is obvious that the presidency is not in synergy with the National Assembly.

“That is why the ruling party which is in control of both Houses has not been able to influence its members in line with what it wants”.
“I strongly believe that this may have come up as a result of the internal problems of the APC, the acrimonies between them triggered this”.

That the motion was not moved by an APC member was just diversionary. Acted for APC people ‘’someone from the opposition brought it up and the person acted for APC people. I think the PDP member from Port Harcourt did what he was asked to do”.

. The question now should be on whether the process is right. “Some people are arguing that ordinarily, it should be the responsibility of INEC to reorder the timetable, but we are not dabbling into the duties of INEC.
“What we have done is to reorder the election timetable in the interest of the nation. INEC does not make laws”.
“It works with laws that are made by the NASS. Therefore, the best thing to do is to work with the law. We are not fixing dates. NASS only rearranged the order of elections. We had it during Shagari’s time and other times. Getting two-thirds majority”

‘’One thing some people don’t know is that it may be quite difficult for us to get a two-thirds majority of the House because the chamber is always empty”.

Most times when the most critical aspect of lawmaking which is the consideration of Committee jobs is considered most members don’t attend. ‘’When a Bill gets to that point it is very expedient that every lawmaker is in the chamber to make contributions because that is the last process of a bill becoming a law”.

In most cases, we are less than 30 to consider a Bill. ‘’ If it comes to a situation where the President withholds his assent, a two-thirds majority of both arms of the National Assembly is required to override it. That means that every member will be seated. This is just futuristic because the party withholding assent is the party in power.

‘’When it comes to carrying out such a critical assignment, everybody is required to be there if we must override the President’s veto.  It does not really require a quorum. All it requires is for the majority of the members to be present. But when it involves plenary to consider bills and motions, a quorum is required”.

The consideration of the Bill is what every member should take serious but the quorum issue is not there. Consideration of Bills comes as the last item of the day, so most members often leave before that time.

Also speaking, another lawmaker, said:” I can’t say that APC members did not contribute to making it a reality. Whether it was influenced by APC members does not matter. As lawmakers, the interest of Nigeria is more important than the ambition of an individual or a privileged few.
Posted by Urban Express News at 14:47:00