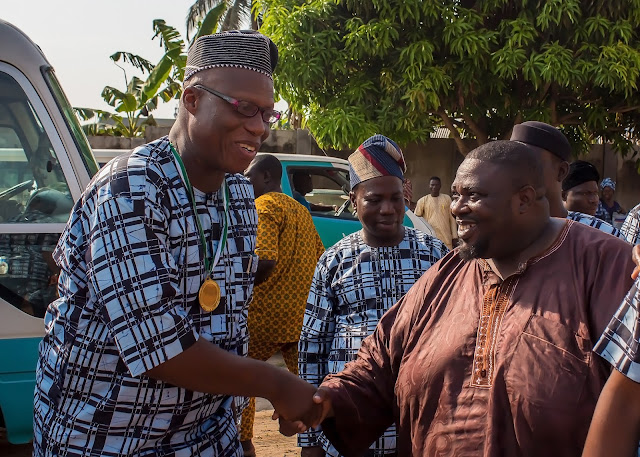 
Speaking at the event was the chairman who indeed is at the centre of all. Making his remark during project presentations, Hon Gbenu could not hold back his happiness as he appreciates his people for what he describes as ‘’my people’’ ‘’saying without you I will not be here, you are the reason for making me celebrating today and indeed my happiness hold no bound as I present to you all I promise you if I’m elected within hundred days into office’’ 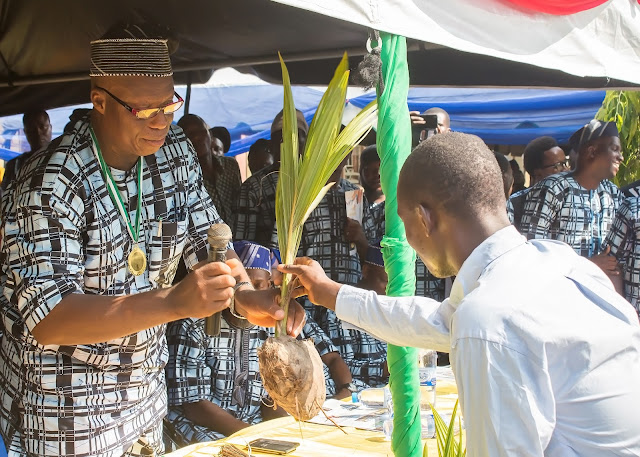 Hon Gbenu said he has provided free school uniform for all the  eight existing  public schools to the tune of over hundred pupils. ‘’doing these is simply to help those who are unable to provide school uniforms for themselves in other to encourage them and bring the best out from them and making them be economically independent for Nigeria and their local government in specific. 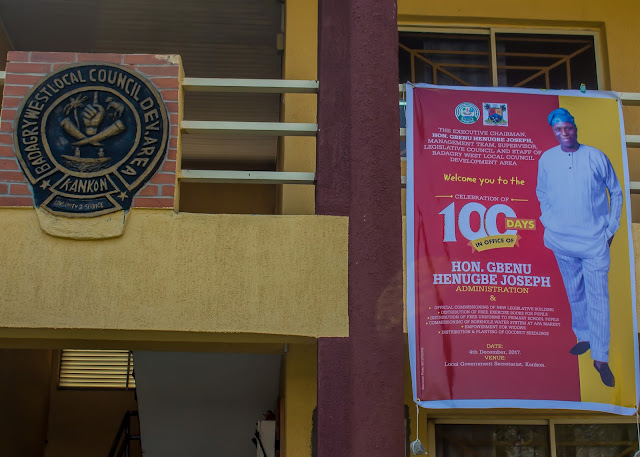 Hon Gbenu Joseph said part of his promises during election period  was to provide twenty thousand exercise books for students, ''here we are, a promise made is promise kept’’ he made good his promise, as he presents to the public, Twenty Thousand exercise books that would be given for free in all the eight existing public school that  made up the communities in Badagry west local council development area. Hon Gbenu rehabilitated Owode Apa road with origin from border community since its having adjoining linkage with his community that thrives through joint activities in terms of opening up developments that centred on the local economy. 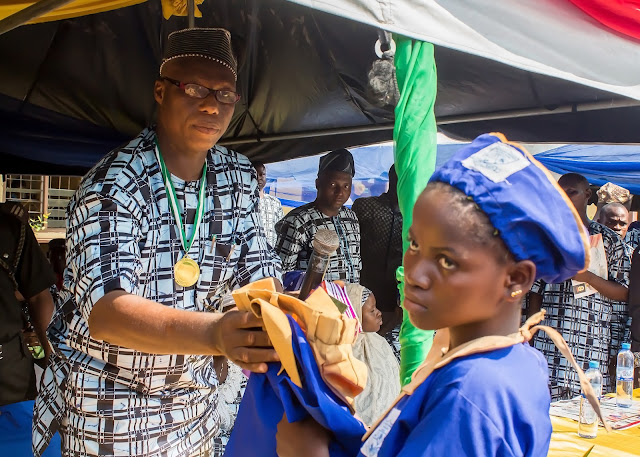 Making water accessible is not only healthy but ensuring safer living and fuller lives, the council chairman provided standard bore-hole at the centre of Owode Apa Market for easy accessibility and meeting the needs of the market women when it comes to potable water. The farmers are also not lefts out. The council chairman present to farmers One thousand coconut seedlings. In its presentation, Hon Gbenu said he was particularly excited with the farmers for their outstanding performance in the just concluded world food day celebration organized by the state government. ‘’ Our people are predominantly farmers, and putting our policy focus in the direction of agricultural development is never a bad idea, we shall continue in this direction essentially in coconut production since Badagry environment is known for producing coconut, encouraging them means boasting agriculture and creating employment’’. 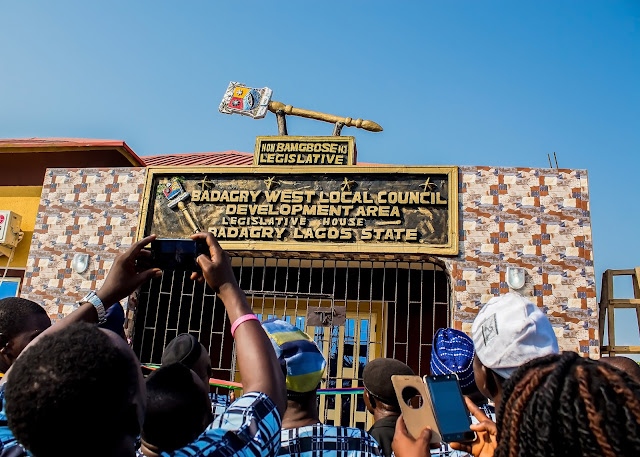 For security concern, Hon Gbenu made provision for fixing of council gate and purchase of a generator to encourage power supply to the council. Hon Gbenu said that the border communities would soon be in another joyous mood as his government had concluded the discussion with  Border Communities Development Agencies ( BCDA)under federal government of Nigeria to make provision for construction of lock-up shops, within adjoining communities that border republic of Benin. He said his government intends to bring in revenue agency that will help block all revenue leakages and at the same time, develop new channel where money is generated.

Conducting Urban Express-News round projects executed, Hon Gbenu named the new local government legislative house after its Badagry representative at the National Assembly, Hon Bangbose.This, he did  In his opening remark, where he Announced that the legislative house is hereby named after Hon Bamgboye. He discribe Bamgboye as an astute leader with the distinctive attribute. He said Hon Bangboye being his Predecessor, has played an outstanding bridge for him. He said it was actually Bamgboye that started the building and that he only completed it. When ask that seeing the way he has been praising his predessesor and acknowledging him with even naming the building after him, what is the secret behind all;  in his reponse, Hon Gbenu said Leaders like Bamgboye can only be discribed as that similar to the Former Lagos State Governor and All Progressive Congress  National leader, Asiwaju Bola Tinubu, whose foundation and lagacies we are all enjoying in lagos as that which  can also be discribed as the reason  we are all gathered here today in Badagry Local council Development Area in specific, given Bamgboye's lagacies and what he saw in future of Badagry (LCDA)’’. 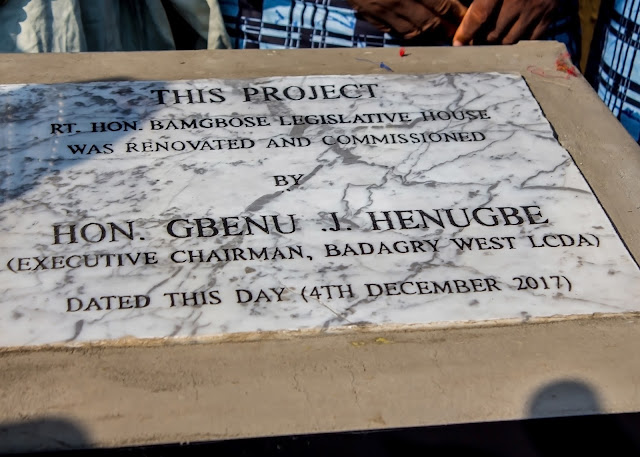 ‘’ The importance of a leader is ensuring your followers are happy, the reason we are all happy seeing Hon Bamgboye in our midst is a testimony for all.’’ When  You ask average inhabitants here about his Person, you will be amazed as to the responses,  he is our leader and we are all part of him and he’s part of us all in these habitats, to which we are sincerely proud of’’.
Dr Paschal Duru, who happened to be an Associate of Hon Gbenu Joseph said he was particularly surprised at the degree of achievement the council Boss was able to achieve in shortest possible time of his Hundred Days in office, describing  him as a focus Nigerian, whose leadership quality would transcend beyond local government administration. ‘’he is a man of focus, whatever he  set to achieve is always top-most on his heart,  until it is done. I have no doubt that he will go places in his political career, as that is what every Nigerians truly needs.’’ When you promise, you fulfil and indeed, telling your people any other things apart from politics, they will stand by you since you would have won their hearts before now’’. 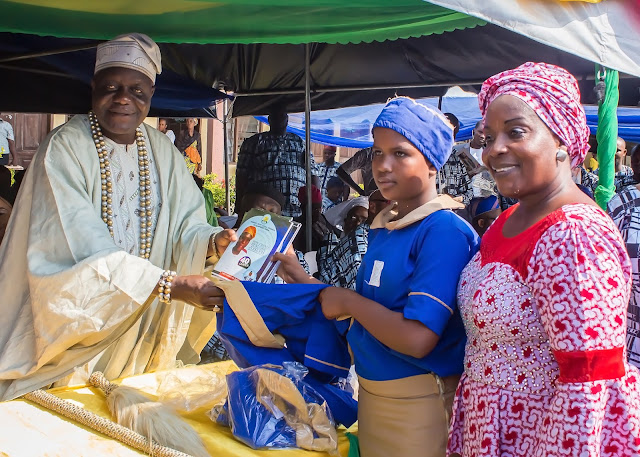 Dignitaries that grace the occasion include traditional rulers of the community, Honorable Bamgboye who indeed, was his predecessor and Presently Representing them at the National Assembly. The aftermath of the event was elating as many invited guest sited was seeing coming out beaming with joy and happiness.
Posted by Urban Express News at 13:14:00