KESHI’S BURIAL ; WE ARE DISAPPOINTED WITH NIGERIA GOVT, SON . 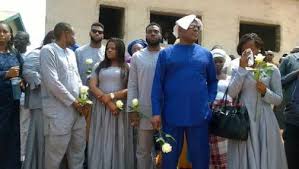 The son of the former Nigerian National team coach, Stephen Keshi who was laid to rest recently has accused the President, Muhammadu Buhari of neglecting his family adding that such action does not strengthen patriotism among citizens of the country.
Hear him’’
“I sat in front of the federal government on national television a few weeks ago and they promised they would honor Dady the way he deserves.
''They said that he had done too much for the country for them not to. They made us change dates to fit the federal government’s schedule. But they didn’t do as promised, we aren’t mad, nor sad, just disappointed, they should be ashamed of themselves''.
This sends a terrible message to our youths that are striving to do great things for Nigeria. The good thing is that we are raised not to ask for handouts. There will be no more postponement, today the funeral ceremonies began in Benin, the place he loved, where his career started.
My sisters, brother and I held it down, with the help of a few others, and now we are putting our dad to rest. We don’t owe anyone and we can say they owe pops everything. No salt, it is not the people’s fault; we still love Nigeria as pops did”.